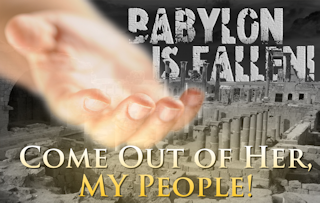 Come out of her, my people

Please keep in mind with what you are about to read within this page that there is no "church" that is 100% perfect,
for it cannot be so until His return, and the fulfillment of the prophesies written of in the Word of Elohim.
This is true as it is written in the first three chapters within the book of Revelation.

In the most simple explanation, there are two churches. The church of Deception, and the Church of Truth.
Each has members of the body of those churches, as the children of that Church. Both cannot exist in the new world to come, the new Earth, where Elohim the Father, and our Adon Yahusha will be with us who believe, and love Him, and the Holy Spirit guides us.

As our Adon Yahusha has said, and as it is written;
John 14:15
"If ye love me, keep my commandments."

You will see as shown from the other page within this website showing the Law of Life, and the difference between the mark or seal of Elohim and His people as to the mark of the beast, and comparing that to what is shown here, a clear and definitely undeniable truth.

The signs of the times are all around us that we are in the last days before the return of our Adon and Savior, Yahusha, The Messiah, and Messiah!
There will come a time where the only thing holding back the final steps in restoring the Earth as new (reborn, born again), and once that has been completed, then comes the armageddon!

Rev 7:1-3
"And after these things I saw four angels standing on the four corners of the earth, holding the four winds of the earth, that the wind should not blow on the earth, nor on the sea, nor on any tree. 2 And I saw another angel ascending from the east, having the seal of the living Elohim: and he cried with a loud voice to the four angels, to whom it was given to hurt the earth and the sea, 3 Saying, Hurt not the earth, neither the sea, nor the trees, till we have sealed the servants of our Elohim in their foreheads." 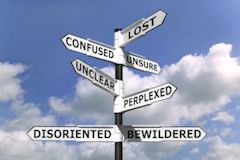 We only know what we are taught as we grow and learn, or actually seek to know and understand. An example of this is the name , to which did not even exist until about 400 years ago, yet now it is the most popularly known name that is presented as being the name of The Messiah.

How can that name be the name above all names if it has only existed for the last 400 years? What is His name? What is His Son's name, if you can tell? What does His Law and statutes say about this? What are His days with us, and what are our days? What is acceptable, and what is not? How do we know unless we do as told, to reprove everything according to His Word.

We are surrounded by a massive world of spiritual confusion designed to keep us fooled into thinking what is wrong is actually right, that bad is good, and day is night. How can someone really expect to understand the truth if the truth has not been made completely available to them, or has it? Chances are, you have a Bible, but does it tell you His name? What is the name of our Father above? When you realize the titles "" or "" is not His name, and begin to really look for the truth, it is then you will find it. Ask yourself what is His name, and what are His appointed times according to His Word, and then you will begin to understand more about this spiritual confusion. There is far more meaning to His Law and Kingdom than we might really understand.

"...is purely a creation of the Catholic Church."

"We hold upon this earth the place of Almighty."
"Pope," Ferraris’ Ecclesiastic Dictionary:
"The Pope is of so great dignity and so exalted that he is not a mere man, but as it were , and the vicar of ."

"Of course the Catholic Church claims that the change was her act…And the act is a MARK of her ecclesiastical power and authority in religious matters."

"The letters inscribed in the Pope’s miter are these: VICARIUS FILLII DEI, which is the Latin for, "Vicar of the .""

"If Protestants would follow the Bible, they should worship Elohim on the Sabbath day by Elohim is . In keeping the , they are following a law of the Catholic Church."

"The [catholic] Church is above the Bible, and this transference of the Sabbath observance is proof of that fact."

John A. O'Brien, The Faith of Millions: the Credentials of the Catholic Religion Revised Edition (Our Visitor Publishing, 1974):400-401

"But since , not , is specified in the Bible, isn't it curious that non-Catholics, who claim to take their religion directly from the Bible and not from the Church, observe instead of ? Yes, of course, it is inconsistent; but this change was made about fifteen centuries before Protestantism was born, and by that time the custom was universally observed. They have continued the custom even though it rests upon the authority of the Catholic Church and not upon and explicit text in the Bible. That observance remains as a reminder of the Mother Church from which the non-Catholic sects broke away—like a boy running away from home but still carrying in his pocket a picture of his mother or a lock of her hair."

"Question: Have you any other way of proving the Church has power to institute festivals of precept?

"It was the holy Catholic Church that changed the day of rest from to , the 1st day of the week. And it not only compelled all to keep , but at the Council of Laodicea, AD 364, anathematized those who kept the Sabbath and urged all persons to labor on the 7th day under penalty of anathema."

The claim of law and calendar related times:

By thier own admission, they point out their attempts to change times and laws, and show the model of which the real Assembly of Yahusha Messiah, and Yahuwah the Father should be like, and not be decieved by what they have done with the attempt to change the times and laws.